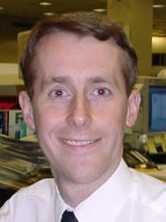 Martin Baxter is an analyst at Nomura International in London. Before that he was Fellow of Pembroke College Cambridge, and also of the Cambridge Philosophical Society. He has held a one-year visiting position at the University of British Columbia, and has been an invited speaker to academic meetings in Europe and north America.

Whilst working in Cambridge's Statistical Laboratory, he has written numerous mathematical journal papers on topics in probability and stochastic processes, and he was a founding organiser of the Cambridge Finance Forum, and has given lectures for Part III of the Mathematical Tripos covering an introduction to stochastic calculus and its applications to modern finance.

He now is responsible for the mathematical modelling of derivatives for Nomura's Global Fixed Income Division, including interest-rate, credit and foreign exchange markets.

Andrew Rennie studied mathematics at Cambridge. He is presently head of analytics for Merrill Lynch Europe, specialising in exotic interest rate derivatives, a position he reached via philosophy, chemistry and graphic design.

After graduating in mathematics from Trinity College Cambridge, was awarded their Hyam Scholarship for two years of postgraduate study in philosophy. He instigated an interdisciplinary research project with the University of St Andrews applying functional analysis to crystallography. He is the coauthor of papers in Proceedings of the Royal Society, Acta Crystallographa, Journal of Chemical Physics, Journal of Physical Chemistry, and Faraday Transactions. He has been a freelance contributor to the Economist and editor of a film journal.

Since then he has worked at the Union Bank of Switzerland and Rabobank International.